At Cafe Campesino, creating a caring global community starts at home. We strive not only to treat one another with dignity and respect, but also to promote teamwork, to celebrate each other's achievements, and, of course, to have fun. 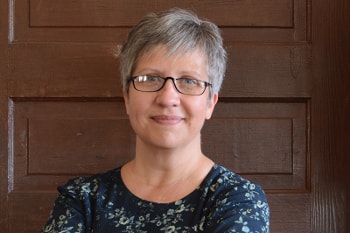 Cori first visited Americus in 1991…on her honeymoon. She and her new husband Kirk had worked with Habitat for Humanity Founder Millard Fuller to launch a Habitat affiliate in West Virginia in the late 1980's. In 2007, the couple decided to move to Americus with their three young children to help start the Fuller Center for Housing. Today, Americus is home for Cori, and Café Campesino is a second family. She taught a Fair Trade curriculum to children at a local home-school cooperative (where Tripp’s kids were some of her students), her eldest son worked as a barista in our first coffee house, and she’s been drinking Café Campesino since she moved here. She likes everything from Sidama Natural to Sumatra French, and on the weekends, when she relaxes at home, she adds a little Sparkman’s half-and-half to the cup. You’ll likely hear Cori’s voice when you call the roastery…and she’ll do her best to make sure you hang up smiling. 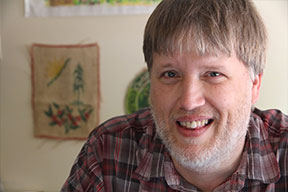 Dave moved to Americus in 2004 as a result of a visit to Koinonia Farm where he helped in the bakery/chocolate room with preparing the tasty treats that Koinonia sells via their direct mail and local channels. In 2008, following that time at Koinonia as well as a stint at The Fuller Center for Housing, he joined the team at Cafe Campesino. Married to a wonderful woman, Jackie, they have a daughter, Maya, whose expertise is running circles around her parents using her ebullient energy level. 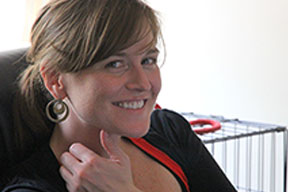 Nema can clearly remember the first time she walked through the doors at Cafe Campesino: two men in camouflage overalls were drinking coffee as salsa music pumped out over the sound system. That neat combination of Southern and international flair lured her to become an intern and later a staffer. She holds Americus in high esteem due to its sense of community, ample volunteerism, and social justice origins and legends. Nema received her B.A. at McGill University in Montreal, Quebec, and an M.P.A. at Georgia State University in Atlanta.  Before leading the company's marketing efforts, she worked in sales and customer service for Cafe Campesino and oversaw the relocation of Cafe Campesino's flagship coffee house, where she served as its manager from 2015-2017. She became an Authorized Specialty Coffee Association Trainer (AST) in early 2019. Nema loves to travel and looks forward to seeing more of the world's coffeelands through her work at Cafe Campesino. 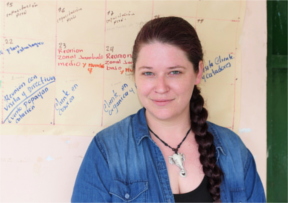 Hannah is an Authorized Specialty Coffee Association Trainer (AST), leading our SCA Barista and Brewing classes.  Hannah started working with us in 2014 and has worked as a barista and a manager at our flagship coffee house in Americus.  She was also instrumental in helping Cafe Campesino open Georgia's first SCA Premier Training Campus in 2017.  She has served as a sensory and technical judge at qualifying competitions for the 2019 U.S. Barista Championship and has recently been named to the SCA Barista Content Creator's group- an international group that oversees SCA curriculum for Barista classes.  Hannah trains our employees and wholesale customers and helps out in customer service and sales.  Her favorite cup of coffee is one she drank at 11 P.M. in Colombia with members the farmer-owned co-op, Fondo Paez, a long-standing trading partner of ours, and when she isn’t drinking, thinking, or talking about coffee, she can be found laughing, hula hooping, or trying to convince her dog to go for a walk. 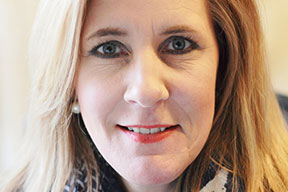 Marcia exudes flair, class, and order to both colleagues and customers alike. She parlays her years spent in banking as a Controller and HR Supervisor to keep the accounts of Cafe Campesino organized and accurate.....and free of coffee spills. She relishes having all her family locally in Americus and recently celebrated the marriage of her youngest daughter.   She counts her best vacation as a 2009 trip to Montana and Wyoming with her husband and one of her daughters and would love to take her grandkids to Disney World one day. 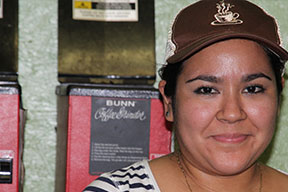 Itzel is enthralled with the whole process of Fair Trade coffee production and how it involves so many different hands at so many different places. This Mexico native is indeed a coffee drinker herself and pays homage to her homeland by sticking with Mexico Full City Roast, which she loves for its nutty, chocolate notes. Itzel is responsible for managing our inventory of allied products and is constantly watching stock-levels to make sure we are adequately prepared to meet our customers' needs.  She has a young son who has boundless energy and regularly travels to Mexico and California to visit family. 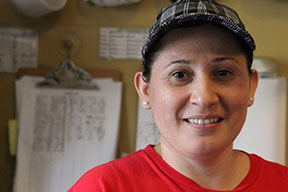 If you ever wonder who arrives first at a coffee shop to brew that vital, inaugural carafe, look no further than Karen. An avowed early riser, she bounces in at about 6:15 AM, gets things set up for the day, and deserves almost as much kudos as The Founding Fathers. Karen is indeed a coffee drinker and calls a tie for her favorite between Bolivia Medium Roast and Peru Viennese Roast. She and her family play copious amounts of competitive volleyball on weekends. And, she and her husband would love to take a trip to Spain both for their fluency in Spanish as well as his being a diehard soccer (football) fan who pulls for Barcelona. 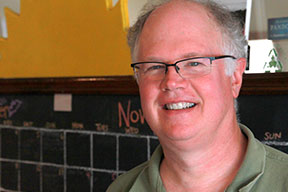 Bill is equal parts pied piper and serial entrepreneur. An Americus native, his extremely frayed passport is proof of his frequent travels to visit our coffee producer partners. Bill's favorite color is actually the palette of colors on the Cafe Campesino label: orange, red, green, and brown since it reminds him of Africa and Central America. Amongst his many side ventures is growing organic blueberries (a superfood which he consumes daily!) on a family farm just outside Americus. His favorite TV show has always been "Gilligan's Island"; he was and is entranced with their resourcefulness and how many ways they used bamboo. On a serious side, Bill is an expert in the fair trade and coffee supply chain world, though he would be the last to admit it. Also, the staff concur that he has a brilliant financial mind, and everyone who works for him is a changed person....for the better! Through his leadership and example, Cafe Campesino has become part of a greater movement - with emphasis on social entrepreneurship, sustainability, & business by the Golden Rule. 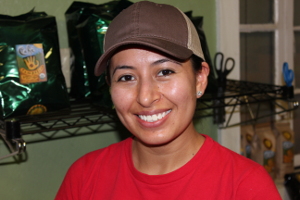 Esmeralda Hernandez started working as a production assistant for Cafe Campesino in 2015.  In that role, she helped roast, pack and ship our coffees.  Now, she manages our daily work-loads and oversees coffee packing and shipping.  Born in Mexico, Esme moved to Americus when she was 15 with her parents and her sister Yaneli, who has worked as a barista in our coffee house. She is the mom of two energetic young boys, loves to spend her free time eating dairy-free, coffee-flavored Ben & Jerry's ice cream, as well as watching movies with her husband Alex.  Her favorite coffees?  Mexico and Guatemala. 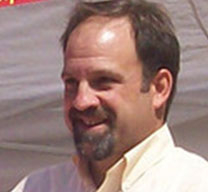 "If there is one thing I want Cafe Campesino customers to know, it is that roasting and delivering the best fair trade coffee in the country isn't enough," says Tripp Pomeroy, board member and former president. "In order for us to truly make a difference, we need to ensure that the Cafe Campesino "experience" is a uniquely positive one...consistently. Our customers should feel satisfied, if not energized, by their interaction with Cafe Campesino. Ultimately, developing great relationships with our customers is part and parcel to building and sustaining the great relationships we have with our producers and making fair trade flourish."

Tripp is a long-time friend of Bill, whom he met while volunteering with Habitat in 1989-1990. He has more than 15 years of working experience in business and new venture development and management, international trade, sales and marketing and communications. He has lived and worked in Mexico and Paraguay (where he met his wife) and has worked on a variety of business ventures in Argentina, Brazil and Italy. He is fluent in Spanish. "Based on my experience in Latin America and the Caribbean," Tripp says, "fair trade is one of the most effective ways to instill ethical, compassionate and transparent business practices in a world where they are sorely lacking, at the expense of so many good people." In his free time, Tripp enjoys landscaping, reading, throwing horseshoes and playing with his little critters, which include two children, a fun-loving cat and a travel-friendly dog named Lola. 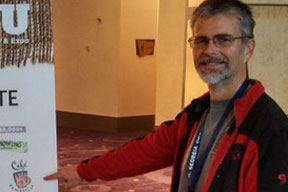 Geoffrey Hennies, AKA Peaceful Traveler, discovered Cafe Campesino while volunteering at nearby Koinonia Partners, our first, and one of our largest wholesale customers. Over the last 20 years, he has followed a path of simple living while offering service to communities and individuals across the country including spending 2-1/2 years helping groups with their rebuilding efforts in New Orleans. Apart from helping with some of our outreach events, he is also offers tech support and is organizer of Cafe Campesino's web presence along with other social justice organizations with Lowthian Design Works. If you have a good project for him contact him on his website.  Geoffrey currently lives in Guatemala, where he decided to move after traveling with Cafe Campesino to meet the Chajul cooperative in 2013.  After that visit, Geoffrey helped launch the www.handsofguatemala.com website that commercializes hand-made textiles woven by the Chajul women's cooperative. 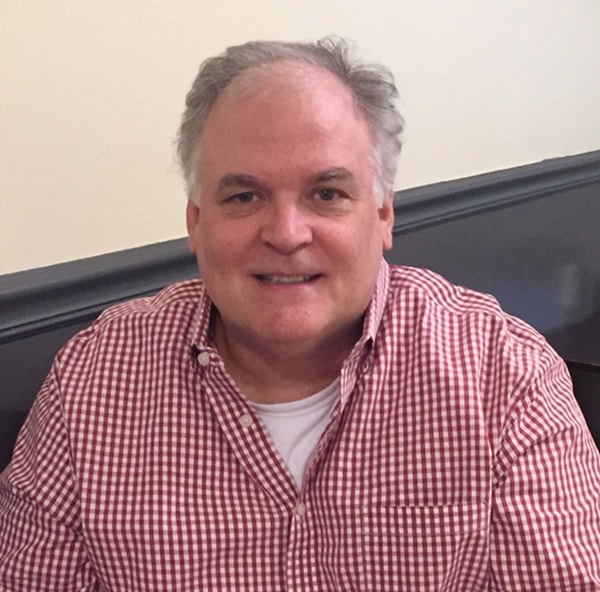 Lee’s made-from-scratch breads, baked goods and sandwiches have become an institution in the Americus lunch scene. A graduate of the New England Culinary School, Lee returned to his hometown of Americus after working at Elizabeth’s in Savannah, Highlands Bar and Grill in Birmingham and Cypress Restaurant in Tallahassee, where he was a part-owner. He opened Sweet Georgia Baking Co. in Americus in 2012, and it quickly became an adored lunch destination, making it to Explore Georgia’s “100 Plates Locals Love” and Trip Advisor’s top 10 list of Americus restaurants. When our coffee house merged with Sweet Georgia in 2017, he brought his popular lunch menu into the coffee house. Lee also served as our original roastmaster, helping brother Bill get Café Campesino’s roast profiles up and running in the early years. 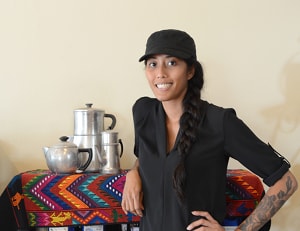 Ifah Hathcock first moved to Americus in 2007 from Singapore where she worked in four-star hotels after graduating from the Singapore Hotel and Tourism Education Centre. Ifah is a cornerstone in Americus’s hospitality community. She often opens our Americus coffee house early in the morning and closes the Windsor Hotel bar as its bar manager late in the evenings. Her enthusiastic smile, her relentless pursuit of excellence in customer service and her unbelievable work ethic have us all in awe. She enjoys high-energy rock concerts (and occasional hikes in the North Georgia mountains) in her free time.

Create an account with us and you'll be able to:

Fill in your email below to request a new password. An email will be sent to the address below containing a link to verify your email address.